The difficult part in online reviews is that more often then not they are solicited for. Not Tax Debt Advisors Reviews. They don’t believe that after doing what they were paid to do they should “hound” the taxpayer in writing a positive review. If a taxpayer does that on their own then GREAT! They appreciate those compliments. However, the best way they believe to evaluate a company is to see past and current successes. In 41 years they have prepared thousands of tax returns and completed thousands of IRS debt settlements. Below is just one of those recent success stories. Vanessa had a phone consultation with Scott Allen EA a few months back. She has two old tax debts from 2008 and 2009 and also needed to still file her 2016 tax return.

Vanessa made the right decision and hired Scott Allen EA to represent her before the IRS. As power of attorney he stopped all collection activity, prepared the 2016 return timely and negotiated an aggressive settlement. Her IRS debt expires in just a couple of years so it was determined that the best solution to her tax problem was getting her into a currently non collectible status until those old years expire. All she needs to do now is remain current on her future tax filings. Its only January and she already has her tax appointment scheduled to prepare her 2017 taxes early. 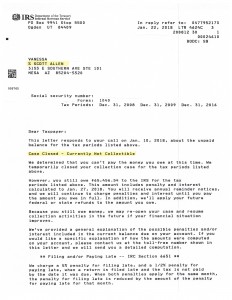 To make an appointment and visit with Scott Allen EA call him at 480-926-9300. He can help resolve your back tax issues or prepare your current tax return. In need of a tax organizer? Click here.