Do you need a Release of your IRS levy? 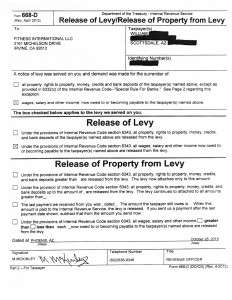 What is required to get a Release IRS levy Phoenix AZ?

Unfortunately, the IRS cant just be called up and asked for a levy release.  If it was that easy then the IRS would never get what it is asking for.  Even more then getting your money the IRS would rather see you in full compliance with them. Once you are in full compliance the IRS is required by law to stop all levy and garnishment action.  Compliance means two things.  First, you have to have all your tax returns prepared and filed.  So, if you have any unfiled tax returns those will need to be caught up to date.  Tax Debt Advisors can assist you in that process.  The other important step to getting you compliant is to be paying your current taxes.  Being current means to be making estimated tax payments if you are self employed or claiming the right amount of exemptions if you are a wage earner.  The IRS does not want you owing on future tax returns.  If you incur future debt then it will default any agreement you might have with the IRS.  Now that you are in compliance, the IRS will be willing to work out an agreement with you on your IRS debt.  And as long as you abide to that agreement you wont find your self needing a release IRS levy Phoenix AZ because (Congratulations) you are in compliance and will not have a levy there in the first place.

Kennon needed four years of back taxes owed to the IRS negotiated into a payment plan to release IRS levy Phoenix AZ.  Scott Allen EA did exactly that for him. It was a stressful few days but it was handled in a timely manner. See the approval agreement letter below. With this set up the IRS will leave him alone and not do any financial reviews down the road as long as he remains compliant on his current and future tax payments. 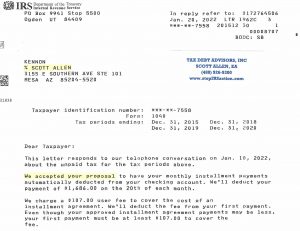 Call and speak with Scott Allen EA to go over the options available to you to get your IRS matter fixed in the best and quickest way possible.