Can you settle IRS debt in Chandler AZ like Nancy did?

The best part of the payment plan agreement negotiated by Tax Debt Advisors Inc for Nancy is that the IRS will NOT file a federal tax lien.  More often then not the IRS will typically a lien with the local county to protect their interest in case of a default or sell of an asset.  For Nancy this is not the case.  She is currently on a $450 a month payment plan to resolve her delinquent tax situation.  To see her settlement agreement view the document below. 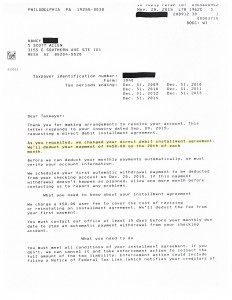 What is required to prevent an IRS tax lien from being filed?  Some of the requirements are the your total tax liability needs to be less then $50,000.  The other main component is to negotiate the debt to be paid through a direct debit out of a bank account.  This program is part of the “fresh start” they instituted about five years ago to give delinquent taxpayers some relief.  The benefits of not having a tax lien filed against you comes handy when a taxpayers wants to purchase a car or home.  For some occupations its important to not have a tax lien to keep their employment.

To see if you are a candidate to get an IRS payment negotiated without a tax lien filed against your credit set up an appointment with Tax Debt Advisors Inc near Chandler AZ today.  Not only will he go over different payment plan options but will help you evaluate all available options to get the IRS off your back.

I think its time you settle IRS debt in Mesa AZ

Do what Nancy did with Tax Debt Advisors.  She hired them to be her IRS power of attorney.  They were able to assist her in the negotiation process through completion. Nancy came in to visit with Scott Allen EA for the free initial consultation.  During that meeting she was guided on the “recipe” to get rid of her IRS nightmare.  Yes, it was keeping her awake at night.  She had a goal of getting herself into a home within the next 12 months.  That goal isn’t possible with the IRS threatening liens, levies, and garnishments.  Scott Allen EA was able to advise her how to get a favorable agreement setup with the IRS, prevent them from filing an IRS tax lien on her credit, and put a stop to the threatening letters.

As a licensed Enrolled Agent Scott Allen was able to assit Nancy by being her IRS power of attorney.  As such, he talked to them in her behalf.  Scott Allen  successfully established a direct debit IRS payment plan which in return the IRS would NOT file a tax lien against her.  As long as she faithfully sticks to the agreement they will never file that IRS tax lien.  One of the key “ingredients to the recipe” is to not bring on any new IRS debt.  If so, you will need to settle IRS debt in Mesa AZ again.  The less you default with the IRS the better.

Doesn’t everyone want their case closed with the IRS?

For further information or to contact Tax Debt Advisors go to their full website. Learn what needs to be done to get an IRS settlement in Scottsdale AZ. William was and is a client of Scott Allen EA.  He came in to see Scott with an IRS agent assigned to his case with levies on all his bank accounts and his main sources of income.  William had not filed tax returns since 2003.  In addition to that the IRS had filed six years worth of tax returns for him causing his debt to the IRS to be inflated by about 500%.  With Scott Allen EA as William’s IRS power of attorney he was able to get in contact with the IRS revenue officer and work out deadlines and commitments to getting the taxpayer back in compliance.  She stopped all future collection activity and that remained in place as long they kept their commitments.  After getting William caught back up on his tax filings through 2014 and providing up-to-date financial information it was determined by Scott Allen EA that he would qualify for a currently non collectible status for all of his IRS debt.  Upon negotiating that with the IRS that is exactly what was approved.  Another “Case Closed” for Tax Debt Advisors. The letter above is actual evidence that Scott Allen EA follows through and is successful in negotiating an IRS settlement in Scottsdale AZ.

To find out what Scott Allen EA can do for you by way of an IRS settlement give him a call today.

Just completed last week by Scott Allen EA of Tax Debt Advisors was this Phoenix AZ IRS payment plan.   After getting her in compliance with all tax returns a successful payment plan was negotiated on her behalf. 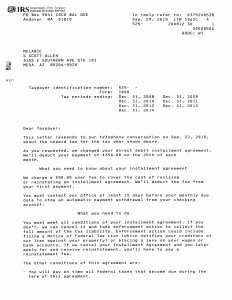 Tax Debt Advisors specializes in dealing with all types of IRS collection matters.  One of those areas is a Phoenix AZ IRS payment plan.  Many clients fit into that area as their best alternative to get a settlement established with the IRS.  When Scott Allen EA meets with you he will go over all IRS settlement options available to you to help select the best one for you.  Other options could be a currently non collectible status or an offer in compromise.  Some Clients will utilize bankruptcy as their best option.

To properly evaluate your options with the IRS Scott Allen EA will need to gather up all your financial information (i.e. proof of income and expenses).  With this information he then can look at the area you qualify for but also the areas you do not qualify for.  Some potential clients come in to meet with Scott Allen EA telling him what settlement they want.  It doesn’t always work that way.  If Scott Allen EA knows up front that a solution you are expecting will not work he won’t lead you on.  He promises straight answers and follow through service.

If you are in need to renegotiating your IRS settlement or just looking to get started contact Tax Debt Advisors near Phoenix AZ today.

Tax Debt Advisors, Inc. can help you with your IRS Abatement of Penalties in Mesa AZ

One of the worst IRS penalties is the failure to file penalty.  This penalty is 5% per month for the first 5 months that you file late.  So by not filing an extension you have added 25% to your total tax debt if you owe on your return.  The IRS will consider Mesa AZ abatement of penalties if you can show “reasonable cause.”  This would have to include serious illness including depression, weather disaster, or some economic hardship that caused you to file late.

The failure to pay penalty is ½% per month.  This penalty is 1/10th of the failure to file penalty.  So the IRS thinks it is ten times worse that you don’t file than not paying your taxes.  On both of these penalties, it is best to have paid off the tax debt owed before requesting abatement of these two penalties.  Request your Mesa AZ penalty abatement by submitting IRS Form 843.  You should expect the IRS to request proof of your reasons for not paying or filing on time.

In either situation, consider a free initial consultation with Scott Allen E.A. at Tax Debt Advisors, Inc. in Mesa Arizona.  You can contact Scott at 480-926-9300.

Regular Post
Written by Scott Allen
There are several options available to settle your Phoenix AZ IRS tax debt.  Each settlement option available has pros and cons—something good about it as wells as something not so good.   If you have a Serious Phoenix AZ IRS tax debt the best way to evaluate your options and the person who will represent you is to meet with them face to face.  In that, you will gain confidence that you are using the right person.  Tax Debt Advisors, Inc offers a free initial consultation for any new client to discuss their IRS tax debt in Phoenix Arizona.

Regular Post
Written by Scott Allen
There are several options available to settle your Mesa AZ IRS tax debt.  Each settlement options has pros and cons—something good about it as wells as something not so good.  However, one is always better that the rest and is usually quite obvious once the facts have been presented to you without prejudice towards any one solution.  That is why Scott Allen E.A. should be your choice when confronted with a serious Mesa AZ IRS problem. Call 480-926-9300 to schedule your free initial consultation.

Dont let you recent Mesa AZ IRS Tax lien get you down any long.  Lets meet today and see what resources are available to satisfy the Mesa AZ IRS Tax Lien recently filed against you.

Regular Post
Written by Scott Allen
A Mesa AZ federal tax levy can take your wages, state refunds and your bank accounts.  The levy will end when the IRS issues a levy release, or you have paid your IRS tax liability, or the statute of limitations expires for legally collecting the IRS tax liability.

If the IRS issues a Mesa Arizona levy against your bank accounts, the bank puts your funds on hold up to the amount you owe the IRS for a period of 21 days.  This allows you time to work out any issues before the bank is required to send the funds to the IRS.  If you incur bank charges as a result of a mistake made by the IRS, you are entitled to have the IRS reimburse you.

If you are under the burden of a federal tax levy in Mesa AZ, seek out professional help immediately. Scott Allen E.A. of Tax Debt Advisors has the expertise to minimize the damage a levy can wreck on your personal finances.  If you would like a free initial consultation, call 480-926-9300 to schedule an appointment.

Regular Post
Written by Scott Allen
Tax Debt Advisors has been assisting clients with Gilbert AZ IRS tac liens since 1977—over 37 years.  Scott Allen E.A. has been involved in his family IRS Resolution business for over 20 years.  Scott is licensed to represent you before the IRS in all fifty states.  Tax Debt Advisors has resolved over 105,000 IRS debts.  Our office is here in Mesa, Arizona.  Beware of companies with toll free 800 numbers contacting you from out of state.  These companies have a poor record of service and can cost you dearly with delays.  Always work with someone local unless you have a referral from someone you trust. One of the reasons Tax Debt Advisors is still in business is that they will not take your case unless it is in your best interest.  You will always get straight answer and timely follow through service.

Scott Allen E.A. of Tax Debt Advisors offers a free initial consultation to resolve your IRS tax lien in Gilbert Arizona and can be reached for an appointment at 480-926-9300.

Regular Post
Written by Scott Allen
The most important consideration is the right person more than the right company.  Scott Allen E.A. in Mesa Arizona is that right person.  Scott has the experience and the expertise to handle your Mesa AZ IRS problem as well as having an unspotted reputation with the IRS as being competent and following through with his services for taxpayers.  Scott does not take your case unless it is in your best interest.  Tax Debt Advisors, Inc. has served clients since 1977 and resolved over 105,000 IRS tax debts.

Consider having a free initial face to face consultation with Scott Allen E.A. of Tax Debt Advisors, Inc.  That is your best way to determine if Scott is the right person to represent you.  You can schedule your appointment by calling 480-926-9300.