If you are considering audit reconsideration in Phoenix AZ may I suggest you make a call to Scott Allen EA. Click on the following image to view a recent success he had with a current client in an IRS a similar situation.  Scott Allen EA saved this client $18,451 simply by challenging the IRS auditor through audit reconsideration in Phoenix Arizona. Just because the IRS says its so does not make it correct.  If you feel your audit did not go as you has hoped and you have a new position for the IRS to consider you may want to consider IRS audit reconsideration in Phoenix AZ.  Audit reconsideration can also be an effective tool if you have unfiled tax returns.  The IRS can “audit” you on that unfiled tax return and asses you on the tax debt that they come up with.  Its up to the taxpayer to file and protest their findings.  One thing to always remember with Phoenix AZ audit reconsideration though is that they are not quick fixes.  As we all know the IRS can be slow and patience has to be used throughout the process. Scott Allen EA has seen IRS audit reconsideration take 2 months and he has seen them take 18 months.  Because of this it is important to have an IRS power of attorney like Scott Allen EA to work aggressively for you. Schedule an appointment to meet with him today for an in office visit.

If you have an IRS assessment that you have zero idea on how they came up with that amount its probably because the IRS filed what they call a SFR return.  SFR stands for substitute for return. What does this mean? It means you had an unfiled tax return so they filed in your behalf. These are returns that you want to take to audit reconsideration. Scott Allen EA has the experience to get that done for you.

Another Case Update for Audit Reconsideration in Phoenix AZ

Christie went through a CP-2000 underreporting audit by the IRS because of some errors made by them and also their previous preparer who prepared their 2016 tax return.  Due to inaction, the IRS assessed Christie over $88,000 in tax, interest and penalty. She met with Scott and hired him to be her power of attorney and investigate the matter. It was discovered that the IRS was erroneously doubling her K1 income. An amended business return was filed and the IRS took both K1’s as income to her rather then removing the original and only assessing the amended K1.  It was nearly a 9 month long fight with the IRS to get this explained and correct; but the result made it all worth it. Over $79,000 of tax, interest and penalty was removed from her account. Click and view the IRS audit reconsideration Phoenix AZ letter below. 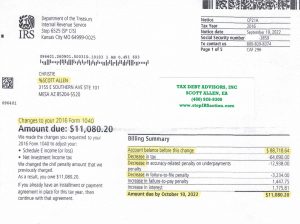