How to get my Tempe AZ IRS garnishment release? 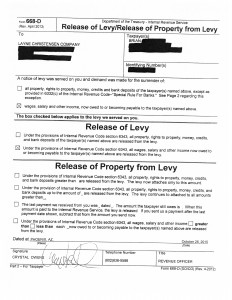 Many people do not know what to do or where to begin when they get the dreaded IRS garnishment notice.  With Scott Allen EA representing you there are better options then just “sticking your head in the sand”.  By clicking on the picture above you will see first hand the Tempe AZ IRS garnishment release for a client of Tax Debt Advisors Inc.  The taxpayer was assigned to a local IRS revenue officer who was being aggressive in collection activity by pursuing the taxpayers bank accounts and wages.  Upon securing the “To-Do” list from the revenue officer on what was required to get the wage garnishment released Tax Debt Advisors Inc was able to get that release completed from the taxpayer just four days later.  The taxpayer had to get two years of tax returns filed and compile his financial information for the IRS.  Upon getting that to Tax Debt Advisors Inc to review and process that information with the IRS the release of garnishment was accomplished.

A full release of an IRS wage garnishment requires you to be in full compliance with your tax filings.  If you have unfiled tax returns Tax Debt Advisors Inc specializes in those preparations.  His average client has about 4-7 unfiled tax returns to get caught up on.  He has the confidence and reputation to handle your case before the IRS’s local revenue officers.  Chances are Scott Allen EA has worked with the the revenue officer your case might be assigned to.  Let him put that experience to benefit you.

Recently Scott Allen EA was able to get a Tempe AZ IRS garnishment release for his client Brian. Brian owed IRS back taxes for nine years (2011-2019). During those nine years a lot of taxes were owed and the IRS was being aggressive to collect the debt. You can view the accepted negotiation by viewing the letter from the IRS below. With this acceptance, the IRS released the wage garnishment.  All nine years of back taxes owed were settled into one nice low monthly payment plan of $291 per month.